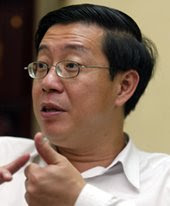 He said the funds were limited and could only be used for social activities which benefitted the state government.

Speaking to reporters after putting up Chinese New Year cultural and heritage celebration banners in the city today, Lim reiterated that the PCTH celebration is a private function, not a state initiative.

It was reported last week that the state government did not give the allocation of RM15,000 to PCTH due to the economic crisis.

"The issue should be put to rest, as PCTH received the allocation from the federal government through the Unity, Culture, Arts and Heritage Ministry recently," Lim added.

He said the state government will hold its Chinese New Year celebrations at Campbell Street from 6.30pm to 10.30pm on Jan 29.

The Chinese New Year cultural and heritage celebrations will be held in the George Town heritage area on Feb 1, from noon to midnight, and will feature cultural performances.
Posted by Billgates at 9:32 AM No comments: