THE Penang Government is looking into three proposals to build a RM1bil Meetings, Incentives, Conventions and Exhibitions (MICE) centre.

Penang Tourism, Culture, Arts and Heritage Committee chairman Danny Law Heng Kiang said a decision would be made in three or four months and if green light was given, it would be one of the first projects approved to boost the state as a tourist destination.

“The state is looking into three proposals to build MICE centre to cater for large confe-rences and seminars. 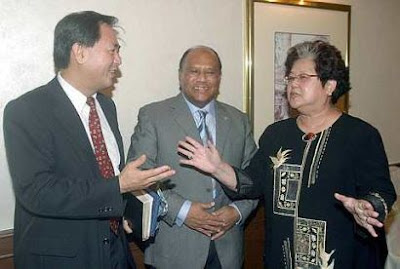 “The first location proposed is in George Town where 8.1ha of land will have to be acquired and reclaimed.

“The second proposal is by a Penang-based conglomerate to build the centre off the Jelutong Expressway in which the company owns the land.

“There is also another proposal that comes from a joint venture of Middle Eastern and local investors to build the project on 2ha of state-owned land in Bayan Mutiara,” Law told reporters after a Malaysian International Chamber of Commerce and Industry (MICCI) dialogue with Penang tourism players.

On proposed theme parks in the state, Law said two proposals using land in Balik Pulau were being looked into.

“Both Chinese and Middle Eastern investors in joint ventures with local companies have shown interest in building a theme park in Balik Pulau.

Over 40 tourism representatives from hotels, airlines and tour agencies attended the luncheon-cum-dialogue at Traders Hotel.

I agree that Penang needs a MICE centre. But we could also convert all our heritage buildings and unused godowns into unique convention centres too. Building new structures might be more expensive. I would like to share with you my ideas which I have posted in my blog Betel Nut Chronicles concerning this subject
http://betelnutchronicles.blogspot.com/2008/06/kee-phaik-cheen-penangs-queen-of.html

Penang Chief Minister Mr. Lim Guan Eng marked his 100th day in office by saying that he would ‘rather fail trying than having failed to try’. This is truly a wise saying that reflects the sincerity of his efforts to bring Penang back to its glory days.

And then I turned to The Star newspaper on the same day and came across the news report entitled ‘Ideal site for centre (i.e. Penang International Convention Centre) – Build project at tourist beach belt, Kee urges state’, and I was reminded again that amidst our newly elected innovative leaders, Penang is still harbouring a few antiques from the past.

Datuk Kee Phaik Cheen, the federally appointed Penang Tourism Action Council chairperson has preposterously suggested that the new convention centre be built in Batu Ferringhi or Teluk Bahang. It was not a surprise that she came up with such an environmentally unfriendly suggestion. As we all know old mindsets are deeply ingrained with ideas from yesteryears and they find it difficult to change and adapt to current times.

Penangites will surely remember the disastrous ‘Longest Beach Buffet’ organized by Mdm. Kee Phaik Cheen many years ago in Batu Ferringhi. I could not recall the exact year, but it was during the era when the government was preoccupied with breaking world records of all sorts. Hotels, local restaurants and hawkers were invited to participate and offer their culinary delights all along the beach starting from Rasa Sayang Resort to Park Royal Hotel (Now Grand Plaza Park Royal).

It was the worst buffet which I have ever attended. Despite the appointment of buses to ferry people from designated points in George Town, there was a massive traffic jam on the only narrow road leading to Batu Ferringhi. After arriving, we were forced to wait for more than an hour along the access lane to the beach because by then, the whole shore line was cordoned off to prevent non-paying participants from entering.

Then, just as the event was about to start, the sky decided pour down on us and strong wind began to blow leaves, twigs, food, plates, drinks and table cloth all over the place. And when the buffet finally started, the huge crowd surged forward ‘Penang style’ and attacked the buffet line.

It was a total disappointment indeed and many people were outraged that there were not enough food and drinks to go around. In fact my friend and I only managed to grab a tiny morsel of food and had to share a little glass of lassi drink.

That night everyone left the party feeling tired, wet, hungry and thirsty. Everyone EXCEPT the VIP’s of course, who arrived on a luxury yacht and dined on the manicured lawn of Rasa Sayang Resort.

I suppose we could blame God for the thunderstorm and call it the‘I-ak of Gott’ (‘Act of God’ pronounced Samy Vellu style). But the lack of food, traffic congestion and poor organization were definitely logistic problems created by the organizers’ lack of common sense.

And now Mdm. Kee Phaik Cheen has suggested building the proposed Penang International Convention Centre in either Batu Ferringhi or Teluk Bahang, citing that there are enough hotels here that can provide 6000 rooms and a lot of unused land in the area which is suitable for the project. I agree that the ready availability of accommodation for future convention delegates is a good reason for locating the centre here but I would strongly advise Mdm. Kee to take her hands off the pristine land in Batu Ferringhi and Teluk Bahang.

The hills and beaches here should be conserved and kept for recreation purposes. As it is, the current massive development projects in Batu Ferringhi have caused a lot of pollution and deterioration in the environment. Does Mdm. Kee know that the amount of tourists to Batu Ferringhi has been dwindling year by year? If we were to build a high density convention centre here, wouldn’t it cause over crowding which will lead to the destruction of the beauty of this area?

First of all, ever since that fateful buffet evening many years ago, there is still only one narrow winding road from George Town to Batu Ferringhi. Secondly the public transport system is still inefficient and not trustworthy. Thirdly the massive hill cutting activities being carried out by luxury home developers along the way have increased the risk of landslides during heavy rain. In fact many accidents and soil erosion have occurred during the past few years due to unsupervised development.

Even now, the road is already congested during weekends and holidays. I could not imagine how choked up it would be with a new convention centre here. I would not even want to think about the disastrous consequences of landslides.

Perhaps Mdm. Kee has not learned her lesson from the Longest Buffet tragedy. What she is proposing will ultimately strangulate Batu Ferringhi and cause it to die of congestion.

Malaysian politicians tend to have the notion that whenever we need a new venue for some purpose, we have to build a new structure. That is why our country is dotted with so many ugly mega structures which are only used occasionally and remain vacant throughout the rest of the year. It is a waste of public funds indeed.

Instead of building new structures, perhaps our new Penang leaders should be more radical and creative. There are many empty heritage buildings and warehouses all around George Town, in particular the Weld Quay waterfront which can provide large floor space for events and functions. It would be an exciting challenge for designers and architects if they could convert these places into MICE facilities. It will be a boost to the efforts to conserve Penang’s heritage buildings and at the same time Penangites will be at the forefront of this radical idea.

Komtar is another suitable building which can be converted into a convention centre. In fact it is already equipped with meeting facilities such as the Geodesic Dome, large atrium for exhibitions and other areas. It will only take a bit of ingenuity and Penang’s creative touch to transform this building back to its glory days again. See ‘Komtar – Let’s do a Madonna’.

With this new idea of recycling old buildings and making it useful again, we will be able to inject life back into old George Town. In fact our city has been a meeting place for travelers and merchants from all over the world since its founding in 1786. People from the Arab countries, India and China have been coming here for centuries to do business and to settle in our beautiful island.

From the article in Malaysiakini, Chief Minister Mr. Lim Guan Eng and his team are doing a great job leading the state. I hope that they are also receptive to this concept of useful conservation. Times are hard due to rising fuel prices and reduced budget allocation. The government needs to be both practical and radical to try out new ideas and make full use of our limited resources.

Sometimes we do not need to look far to other countries for solution. In the case of Penang, all we need is to do is to look around our own island to discover the many treasure boxes that beckon to be opened again.