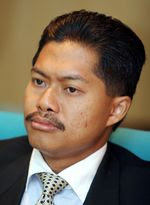 In a press statement, Mohammad Fairus, 33, said he took this step to resign as a state representative to protect the interest of his party, Parti Keadilan Rakyat (PKR).

He said he also wanted to give full attention to pursuing his doctorate, as well as spend more time with his family, something that had to take a back seat as he had to fulfill his duties as an assemblyman.

"This will also give me space to focus on efforts to clear my name from all accusations hurled at me all this time," said Mohammad Fairus who is under probe by the Malaysian Anti-Corruption Commission for corruption.

He voiced his gratitude to his constituents for their support throughout his tenure as assemblyman.

Mohammad Fairus had been under media glare for all the wrong reasons in recent times, the latest being the MACC probe for aalleged corruption relating to quarry activities.

Over the past few days, reporters had waited at the Butterworth Sessions Court, just in case he is charged.

The politician tendered his resignation as DCM I and state executive councillor effective April 8 and since then, PKR has yet to name a replacement.

Just a day ago, Mohammad Fairus had issued a threat, through an interview with a Chinese daily, to PKR de-facto leader Datuk Seri Anwar Ibrahim to clear his (Fairus's) name or else he will disclose a scandal involving the Penang state government and also PKR. (see page 8)

With Mohammad Fairus's resignation as the Penanti state assemblyman, the Election Commission will have to hold a by-election for the seat within 60 days of being informed by the State Assembly Speaker Abdul Halim Hussain.

It was reported that DAP and PAS, PKR's partners in the Pakatan Rakyat coalition, are not happy about forcing another by-election as the people were suffering from election fatique. There have already been five by-elections since the March 8 2008 general election.
Posted by Billgates at 5:12 PM