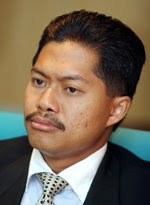 The Election Commission has been informed of a vacancy in Penanti but is only expected to make an announcement on Monday.
Posted by Billgates at 10:17 PM