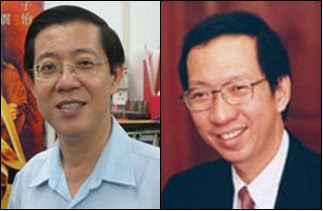 Organiser Agenda Daily said both participants had on Tuesday confirmed their attendance for the public debate, which will take place at 9pm on Aug 20.

Lim and Koh had also agreed on the topic of the debate, which is entitled "The true story behind the land controversy in Penang" (Kisah benar kontroversi tanah di Pulau Pinang).

The debate will also be aired live on either NTV7 or TV9.

Agenda Daily editor Hanafiah Man said about 200 people would be invited to attend the event, which would either be held at the Media Prima studio in Shah Alam or at Dewan Bahasa and Pustaka in Kuala Lumpur.

"It is only by invitation as we have to control the crowd. If anyone is interested in attending, they can fax Agenda Daily at 03-4042 5100," he said.

Hanafiah said the format of the debate would be similar to the recent public debate on fuel prices by Information Minister Datuk Ahmad Shabery Cheek and PKR adviser Datuk Seri Anwar Ibrahim on July 15.

Lim and Koh will each speak during six five-minute intervals in the debate, which will be moderated by Datuk Johan Jaafar.
Posted by Billgates at 10:30 PM