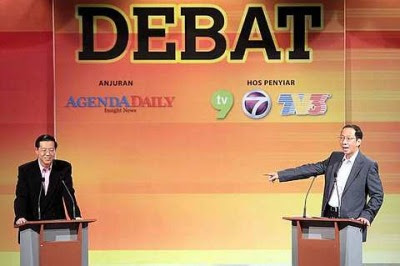 While many Penangites were glued to their television sets for the debate on land issues between the current and former chief ministers, many others gave the live telecast a skip.

A street poll here showed that many did not catch the live debate on Wednesday night between Chief Minister Lim Guan Eng and his predecessor Tan Sri Dr Koh Tsu Koon.

Those who did catch The True Story Behind the Land Controversy in Penang said they were dissatisfied that there was no definite conclusion reached at the end of the programme.

"The reason I watched the debate was because I wanted a clearer picture of the situation. It was also a chance to see our new and old leaders respond to each other," he said.

He added that he would have preferred to watch a live debate on other matters such as the welfare of the rakyat and Penang's infrastructure, rather than on the land issue although it involved millions of ringgit.

Insurance agent Annie Cheong, 33, said she was eager to watch the debate but felt let down after that: "I don't think there is any result from the debate. It's just the same things I read in the newspapers. Nothing new."

She said that instead of a debate, it should have been a live call-in programme to answer questions from the public.

"If both of them were to debate again, I think they better do it in English instead. Although they both speak Bahasa Malaysia well, they would have been able to express what they wanted to say better in English," she added.

College lecturer Tan Ching Mei, 32, said the beginning of the programme was boring but the pace picked up after a while.

"I was not one of those keenly anticipating the debate. I just watched the programme for a chance to hear both sides at the same time and know what is happening," she said, adding that she missed the ending, as she was busy.

Her colleague Prakash Vello, 38, said he was sorry he missed the debate even though he heard from others that it was inconclusive.

"This was an opportunity for both parties to shed light on the matter," he added.

Auctioneer Angeline Woo, 32, said she badly wanted to watch the debate but had other matters to attend to.

"I heard that it was an intense debate with no conclusion," she said.
Posted by Billgates at 9:18 PM