Clad in traditional costumes, 150 cultural performers added a dash of colour to the coastal road in front of Queensbay Mall.

The mall’s front entrance on Persiaran Bayan Indah was filled with students, avid photographers and Penangites keen on catching the National Day parade.

Jelutong MP Jeff Ooi was spotted — not among the VIPs, but among the professional photographers with their SLR (single lens reflex) cameras and bulky equipment.

Ooi admitted to having a soft spot for the latest cameras.

To mark the start of the celebration, the Rukunegara was recited and seven shouts of “Merdeka!” broke the silence of the clear, blue morning. 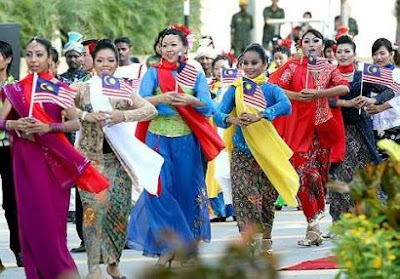 Colourful show: Performers in traditional costumes parading at the coastal road in front of Queensbay Mall.

A traditional Malay kampung ‘house’ (an elaborate prop) served as the stage, while a huge Jalur Gemilang that draped the mall, provided a patriotic backdrop for the Semarak Merdeka cultural show.

Featuring a combination of songs, sketches, boria and sajak presentations, the show was a summary of Penang’s history and traditional heritage.

The main event — a procession of 7,672 participants from 96 contingents — was up next.

All the participants were from non-governmental organisations (NGOs), uniformed bodies, schools and learning institutions, and the private and public sectors. 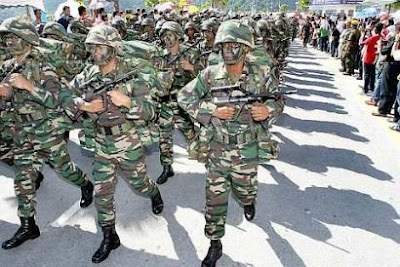 In full camouflage: The armed forces contingent marching in the parade.

While the school bands impressed the crowd with their musical talent and well-rehearsed marches, the armed forces, po- lice and rescue and fire department drew loud cheers as they showed off their artillery and vehicles.

The huge fire trucks, rescue boats and jet skis as well as the newly-polished superbikes were among the wheels that were on parade.

Wearing everything from spiffy uniforms to vibrant batik shirts and formal kebaya, the participants seemed oblivious to the sweltering heat as they sang and waved to the crowd. 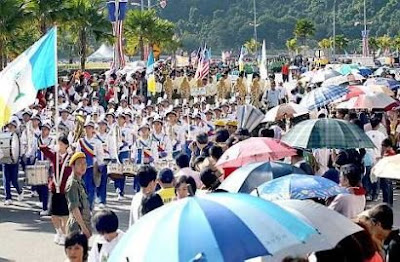 The crowd watching a band marching past.

More than 150 policemen, enforcement officers from the Penang Municipal Council, Rela members and Civil Defence Department officers, were deployed to control the traffic and crowd.
Posted by Billgates at 2:10 PM