The Penang Development Corporation is lodging police and Anti-Corruption Agency reports against a now-defunct company, of which Umno Bukit Bendera division head Datuk Ahmad Ismail was a director, over its failure to return some RM500,000 to the state after a failed land deal.

Chief minister Lim Guan Eng said he has directed the PDC to make the reports tomorrow (Sept 3) after his administration found that Popular Profile Sdn Bhd (PPSB) had wrongfully taken and kept the money from the state in 1998. PPSB wound up in 2005. 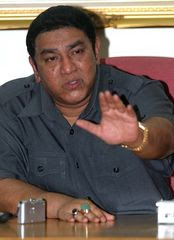 Ahmad is currently at the centre of a storm over the alleged racist remarks he made during the Permatang Pauh by-election, which had in recent days attracted numerous police reports filed by MCA, Gerakan and DAP grassroot leaders.

Speaking at a press conference at InvestPenang here today, Lim said PPSB, with Ahmad as director, had bought a 4.2ha industrial land in Bukit Minyak from PDC for RM5.5 million in 1997.

The company placed a 20% deposit totalling RM1.1 million on May 9, 1997, but was unable to pay the full amount later. It subsequently asked for the agreement to be cancelled and the money refunded on May 30, 1998. PDC agreed to return 10% while the remaining 10% was to be forfeited.

"But the 10% that was to be returned should have been payable to Perbadanan Usahawan Nasional Bhd (PUNB), the body that had financed the purchase, not to the company," Lim said.

Noting that PPSB did not then pass the amount to the bank, Lim said PDC had to then fork out an additional RM500,000 to be paid directly to PUNB to get back the title for the land.

Lim questioned why the state did not pay the amount directly to the bank.

He also questioned the state’s rationale for giving Ahmad a "first-class datukship" by awarding him the Darjah Mulia Pangkuan Negri, which carries the title ’Datuk’ in 2002 after his company had taken and kept the money from the state.

He said the police will investigate all the police reports lodged by DAP, Gerakan and MCA against Ahmad.

"We will identify witnesses and they will be called in to give their statements on the case."

The reports lodged against Ahmad had alleged that he uttered racist comments that the Chinese are 'only immigrants' and that 'it was impossible to achieve equal rights amongst races as the Chinese were only immigrants'. He allegedly uttered those words in a ceramah in Permatang Pauh on Aug 25.

There was much furore over these alleged comments by Ahmad in the last few days, including by Barisan Nasional's component parties.

There were also calls for discipline action to be taken against Ahmad. However, Prime Minister Datuk Seri Abdullah Ahmad Badawi had said he would tell Ahmad not to repeat the offending words again.

Till now, any attempt to reach Ahmad through his handphone has proved futile. It is learnt he was overseas when the furore over his remarks were building up and had only returned to Malaysia on Aug 31.
Posted by Billgates at 11:27 PM