Some things have not changed with Lim Guan Eng, although he is now the Penang Chief Minister.

And among that is his penchant for economy class air travel.

As the chief executive of Penang, Lim is entitled to a business class seat but he is having none of it. 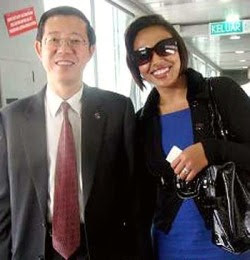 Ning posing with Lim at KLIA on Wednesday in a photo taken from Jolly's blog.

As travellers queued to get into the airplane, many are surprised to see Lim standing in line with them, just like in the days before the DAP wrested Penang from the Barisan Nasional in the March general election.

Among those who were surprised to see the Penang CM in economy class were songbird Ning Baizura and her manager Vernon Kedit Jolly, who were at KL International Airport last Wednesday.

Jolly was so moved that he wrote about it on his blog, which spurned off reactions among other bloggers.

Lim, who has adopted a “no formalities” approach since assuming the CM’s post, said he said he had told his staff to book him economy class tickets whenever he needed to fly.

“I hope to lead by example. If I can reach my destination and save some money at the same time, why not?” he asked.

That is not all. The Chief Minister also does not check into luxury-class rooms in hotels.

“I usually request for a room that is at least one level down from what I am accorded,” Lim said.

Jolly, who flew in First Class with Ning on that flight to Penang, said Lim had earned their deepest respects.
Posted by Billgates at 11:51 AM

YAB Guan Eng. You have our respect too.

Thank you, YB Lim Guan Eng. You have inspired us, you have showed us your humility. You have set an example for us to follow. Touching, respetable. Keep up the good work.