Council to install 24 CCTVs in district - The Star

TWENTY-FOUR closed-circuit television (CCTV) cameras will be installed at the south-west district areas and Bayan Lepas free industrial zones (FIZ) as a move to increase surveillance on traffic flow and combat crime.

He said the council and police have consulted each other on where to place the cameras. 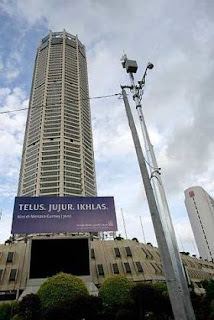 A CCTV installed at the Penang Road-Jalan Datuk Keramat junction.
Six cameras will be placed at Bayan Lepas FIZ while the rest will be installed at strategic locations in Balik Pulau.

“We submitted our proposal early this year and the ministry gave us the green light two months ago.

“The ministry has yet to decide on the date of installation,” he said over a telephone interview.

In October last year, the council installed 31 CCTVs in George Town and its surrounding areas at a cost of RM5.8mil.

A public announcement system is installed next to each camera to alert the people during an emergency.

Zainal Rahim said that since the installation, the high-definition cameras, which could zoom in at a distance of up to 100m, have proven to be an effective tool in monitoring traffic flow.

“When we noticed there are double or triple line parking at a particular location, enforcement officers will move in to issue summonses to vehicles causing traffic obstruction. 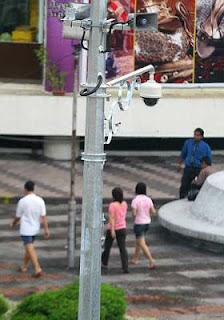 A CCTV installed at the Penang Road/Jalan Datuk Keramat junction.

“By doing so, the traffic flow can be smoothen immediately,” he said.

George Town OCPD Asst Comm Azam Abd Hamid said with the aid of the electronic surveillance, policemen could move in in the event of a crime.

He said on several occasions, patrol cars were deployed to the scene when cars were found to have stopped for a certain period of time in front of jewellery shops and banks.

“Our patrol cars will move in immediately should we come across such cars with drivers or passengers behaving suspiciously.

“We do not want to take the chances as who knows, they might be there to check out the location before deciding to strike,” he said.

He added that the police would be able to play back the footage in the event a crime was reported in a CCTV zone.
Posted by Billgates at 8:45 PM