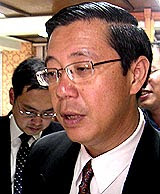 He said the state was studying a new land policy, which would allow the 30-year, 60-year or 99-year leasehold land be converted into freehold land on a case-by-case basis.

“We are also looking into allowing the tenure of leasehold industrial land owned by the state government to be extended from 60 years to 99 years.

“Those given the approval must, of course, pay the land premium,” he said after he led a donation drive at the Air Itam market for the Sichuan Earthquake Fund yesterday .

Lim said the move to change the land policy was decided at the state Exco meeting on Friday but there were legal hurdles to overcome.

“We have to make sure that this policy is in compliance with the National Land Code,” he said.

He said the study would include the economic impact on both businesses and on the state.

“The state state government will also benefit from the premium to be paid for the extended lease tenure,” he said.

On leasehold commercial land, he said there would be no change to the land policy, which extends to 99 years.

Lim said the state government would take steps to ensure those allowed to convert residential leasehold land into freehold do not sell off the land immediately.

He said each landowner has to submit their own application for the change of land status.

“Those who want to apply can start applying now and if they need help, they can contact their assemblymen,” he said.

A total of RM2629.20 was collected from the public during the one-hour donation drive.